Hello loyal readers! If you were a child of the eighties (as I was), you may remember the public safety announcements (or PSAs) featured on NBC during multiple primetime and Saturday morning programming spots. While you may not remember the message behind these multiple PSAs, I bet you at least remember that blazing star featuring “The More You Know” trailing behind it at the end of each of these brief messages. Well I don’t have a shooting star to introduce the topic of this current post, but I will be up front in informing you that this post shall serve as a PSA to all the dog lovers out there.

When I started this blog I informed all of you that I may address cases I have seen in the clinic firsthand as I feel they present not only a great story, but also a great message to other pet owners. I encountered a case last week that I feel needs to be shared. So settle in to hear the tail (See what I did there?) of Stella and the “perfect” stick.

The cliff’s notes of Stella’s case is that she was brought to see us because of a wound on the neck that did not seem to want to heal. However, the case was much more involved than the simple statement listed on our appointment calendar. In actuality, Stella’s story began over six weeks earlier while she was outside playing with “dad”. Because Stella is so special, her owner spent a great deal of time outside searching for the perfect stick so that he and Stella could enjoy a game of fetch. They were both enjoying what I am certain was a beautiful afternoon outdoors burning off excess energy, when Stella came running to dad with that “perfect stick” in her mouth. Now there may be arguments about what happened next, I am positive that the stick actually became possessed and wanted to ruin Stella’s wonderful afternoon and decided to impale her in the mouth. Stella’s owner says that the part of the stick hanging out of Stella’s mouth happened to hit the ground at just the right angle causing the piece of the stick in Stella’s mouth to briefly become lodged below her tongue. You are of course free to believe whichever story you like. The stick worked it’s way loose very quickly, but Stella was left with a wound in her mouth. Since her owner was obviously very concerned and felt horrible about what happened, he took her into his veterinarian who appropriately addressed the situation by examining her and cleaning the wound. Stella was also given an appropriate course of antibiotics to prevent any infection from setting in. Stella seemed to heal well over the next few days, and the whole incident became nothing more than a memory.

A few weeks after the “day of the possessed stick”, Stella developed an abscess on her neck which ruptured open. Another trip to the vet resulted in cleaning the wound and beginning another course of a stronger antibiotic. During the next few weeks Stella’s owners moved her to the lovely state of Illinois. Shortly after arriving in the midwest they made an appointment with yours truly, to address the aforementioned “non-healing wound”. During my visit with Stella that day (during which she was a perfect angel), I had the pleasure of viewing her wound in all its glory. Without giving away too many gory details as to the presentation of the wound, I did notice there was a small area central to the wound that was continuously draining a substance that Stella’s owners had been cleaning daily. After hearing the story of the possessed stick that ruined Stella’s beautiful August afternoon, I immediately became suspicious that the stick was STILL trying to ruin Stella’s daily routine, and recommended we schedule her for surgery to explore the wound. Surgery was scheduled for that Friday and we obtained a sample of the “goo” draining from Stella’s wound to be cultured for bacterial growth, while also testing the susceptibility of any present bacteria to various antibiotics.

By the end of the week, Stella was on our surgical table so that we could explore the wound that had become such a nuisance to her. At this time I will let you in on a little secret, every so often a veterinarian encounters a case that is truly gratifying; Stella’s case was exactly that! During surgery I had the pleasure of removing a small piece of the “perfect stick” Stella encountered over a month prior. We then removed any tissue that appeared compromised by this foreign material setting up residence over the past six weeks, flushed the wound vigorously, and closed up shop. Stella was up and about in less than an hour acting as if nothing had happened. We of course gave Stella’s owners the small stick that had caused all of them so much stress during the past six weeks (I’d like to think they threw it in a bonfire just to be sure it was destroyed appropriately) and sent Stella home. Within days we had the results of the culture and sensitivity that had been submitted. The results showed that the antibiotic Stella had been on for weeks, was in fact the best choice for the little bugs brewing in that wound, and probably would have worked wonders if it hadn’t been for the pesky twig left behind.

To date, Stella is doing well. She does not seem to have been phased by anything she encountered over the past few months. However, she begged me to share her story as a public safety announcement informing others of the danger of allowing your pets to play with sticks. Since she was such an amazing patient, I felt it would be a true disservice for me to not respect her wishes. Hers may have been the first case I have seen of this nature, but during my time as a veterinarian I have seen multiple dogs who have come into the clinic with sticks lodged between teeth (one even needed to be sedated for removal of the twig), or wounds that occurred as a result of an unfortunate accident while playing with a stick. Therefore, I feel that I must speak for Stella (and countless other pets) and ask you all to think twice before allowing your pets to gnaw on the stick that fell in your yard. Sure a stick is an inexpensive way to keep your pet happy, but as Stella’s story proves in a matter of moments a stick can become a real pain. 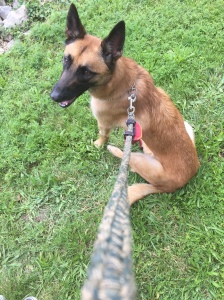 Welcome to SportsVet Animal Medical Center's veterinary blog! Every member of our team is dedicated to building, supporting, and maintaining positive and rewarding relationships between pets and their owners. Our veterinary focus is on enhancing life, optimizing function, and maximizing performance for every patient. We will periodically be posting about veterinary healthcare, helpful tips, important facts about your beloved pet, and every topic in between. Have a topic that you are particularly interested in, and want to know more? Contact us to request a blog post directly from our team! View all posts by SportsVet AMC

Welcome to SportsVet Animal Medical Center's veterinary blog! Every member of our team is dedicated to building, supporting, and maintaining positive and rewarding relationships between pets and their owners. Our veterinary focus is on enhancing life, optimizing function, and maximizing performance for every patient. We will periodically be posting about veterinary healthcare, helpful tips, important facts about your beloved pet, and every topic in between. Have a topic that you are particularly interested in, and want to know more? Contact us to request a blog post directly from our team!

What are you looking for?